INSIDE Inside Sales – Ep 119: Future Gains from Past Lessons 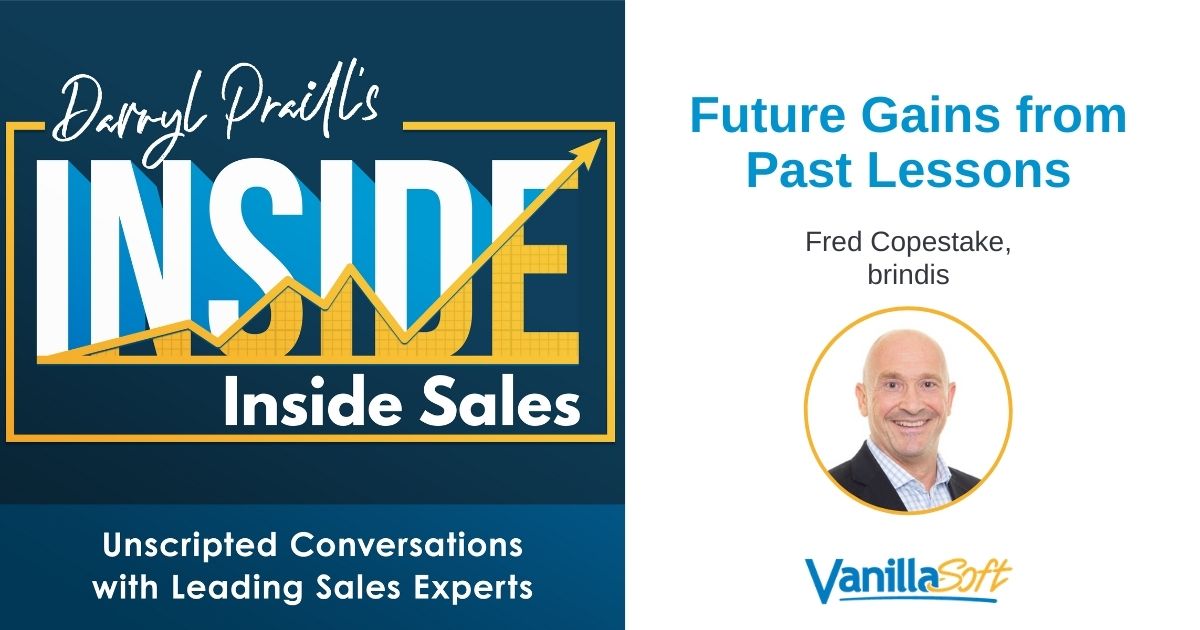 What’s the best way to pick up new sales tactics? Well, turns out that the past is our best teacher.

In this new episode of INSIDE Inside Sales, Darryl and Fred Copestake, best-selling author, sales coach, and founder of Brindis, will take you on a walk down memory lane and give you a crash course on using old-school sales tactics. From the ‘50s to the present day, you’ll get a recap of the tried and true techniques such as AIDA, mirroring, FAB, as well as objection-angling, and understanding what value is. Learn how to grow your numbers with these sales-boosting tactics and find out what the ‘20s are all about on this episode of INSIDE Inside Sales!

Let’s Do the Time Warp Again: The Best Sales Advice From the Last Few Decades

Sometimes it seems like the gulf between generations has never been wider.

Millennials apparently killed breakfast cereal, reaching for the avocado toast instead. But they get back at Boomers by dragging them for allegedly being judgemental, out-of-touch and texting too slowly, if they do it at all. Meanwhile, Gen Z thinks skinny jeans are out.

Gen X, of course, is left out of all the fun, and they’re just fine with that.

And yet some things are either universally appreciated by multiple generations or come back in style so often they’re virtually timeless. Think Ray-Bans, vinyl records, and Eames chairs. They endure for a reason: they still look and feel fresh.

Likewise, the best sales advice has the same vibe.

Fred Copestake, best-selling author of “Selling Through Partnering Skills”, sales coach, and founder of Brindis is a fan of old-school yet classic sales tactics.

It’s important to note that there are plenty of methods that have been tried and discarded over the years. What’s taught in any given era runs the gamut from obsolete to visionary. But “sales practices and techniques always reflect what was happening in the era at the time,” he says.

On an episode of INSIDE Inside Sales, Fred takes us on a tour of the most popular sales strategies from the mid-20th century to the present.

‘50s: Rock around the process

The era that brought us Elvis, Sputnik and McDonald’s was very much about process, says Fred –– “doing the right things, time and time again, to make sure we’re successful.”

If you’d like to argue that it’s not relevant today, “good luck with that,” he adds.

Good processes, whether in overall sales operations or even the structure of a sales call, are the backbone of your work. And they start with having a clear outcome.

Often, Fred will ask trainees what the objective of their call is, and they won’t know. If that’s the case for you, don’t even bother picking up the phone (or connecting that Zoom call), because it will be “an utter waste of time,” he says.

After you’ve identified your goal(s), he recommends following the classic AIDA process:

A:  Grab the prospect’s attention with an elevator pitch, benefit statement, value proposition –– whatever gets them focused on

I:   Show interest in the buyer. Ask questions; listen closely.

D: Build desire by addressing how your solution can address their pain points or challenges.

A: Close your interaction with a call to action of some kind that advances the sales process forward.

The takeaways from this decade are all about the experience, man.

It’s the Age of Aquarius, the heyday of mind-expanding drugs, and the era of psychedelic rock.

We saw this newfound introspection reflected in business, too, with an interest in the psychology of consumer behavior. Sales training began to focus on the ways people make buying decisions, how to read a prospect’s personality style, and how to tailor your approach to their preferences.

It doesn’t mean changing your personality, but you change your behaviors to best appeal to the buyer. Sometimes it just means picking up on clues about how the individual you’re prospecting wants to engage with you. And then reciprocate accordingly.

Don’t listen to those who say there’s one way to talk to prospects (or that certain communication styles are out of style). There’s a reason why a certain level of mirroring happens naturally

(for example, when someone speaks loudly and you inadvertently do too). It’s human nature, and it works.

For those (especially Brits) of an, ahem, certain age, “FAB” was the pink, six-wheeled car in the sci-fi TV series “Thunderbirds.” And of course, it’s short for fabulous, darling.

“You’ve got to understand your products, services, and organization. But if you talk about a bunch of features, you’ll turn [prospects] off. You’ll bore them.”

Instead, you must translate those features into advantages and benefits, but always “in terms of what it means for them,” he adds. Unless they understand how their work will get easier or their bottom line will grow (or whatever other ways their lives will improve), features are irrelevant.

How can you tell whether something is a feature or a benefit?

If it’s even possible a buyer could respond to something you say with so what, you’ve still got work to do. Focus on them, not the product.

Here’s another way to look at it: The ‘70s are known as the “Me Decade.” Imagine your prospect asking: What’s in it for me? (Fred calls it WIIFM for short — kinda sounds like a radio station!)

“You’ve got to tune in to the buyer,” he quips.

‘80s: Wrestlemania (with your buyer)

The ‘70s were downright mellow compared to the ‘80s, which is sometimes called the “Me-First” decade. It was undoubtedly an era of excess –– big hair, big money, big egos. “Greed is good” and all that.

It’s an attitude he feels is reflected in the sales training of the time. That’s why the ‘80s is the decade Fred leans least on.

He sees the overarching wisdom as “all about objection handling,” he says. “The focus was to get to the end of the sale as fast as possible, overcoming objections by bartering hurdles out the way. Wrestle your customer into a compliant state until they say yes.”

Fred is decidedly not cool with manipulative tactics like that.

However, we can look at classic objection handling techniques and dilute them. Rather than argue with a buyer, you can anticipate any rebuttals with prepared, reasoned responses. You can give them the information they need to better understand your value proposition.

We can “treat concerns with concern,” says Fred. “But don’t call it an objection. If somebody is objecting, it’s actually a concern. They’re missing a bit of information. They don’t get something. So take that seriously. Don’t yes, but them –– that’s an argument.”

‘90s to the ‘teens: Consult and confront

“Consultative selling is truly a nineties phenomenon,” says Fred. “I even remember how, coming off of the eighties, it was mind-boggling … we went from being very aggressive to being very cooperative –– very aligned.”

Consultative selling (a form of it, at least) is alive and well today. Fred sees it as “the absolute foundation,” of the most popular sales techniques in the 21st century.

“It got a bit of a revival in the ‘10s with the ‘challenger sale’ concept,” he says.

In case you’ve been living in an underground bunker since “Angry Birds” was a thing, the “challenger sale” is a concept (with a book of the same name) developed by the Corporate Executive Board based on research that found that “the most successful salespeople are the ones who will push back,” Fred explains.

If you see a client, current or prospective, about to make a mistake, you should tell them. A lot of salespeople “find it quite tricky” to do with tact and diplomacy, he adds. “But it’s very much the right thing to do.”

Fred calls the challenger sale “consultative-plus.” It was a natural extension to the major ethos of the aughts, which was value-based selling: positioning oneself as an expert and providing research-based insights that intrigue, educate, or empower prospects.

Now that we’ve taken a walk down memory lane, let’s take a look at what characterizes sales training today.

“We need to just slow down a little bit, listen to what people are saying and then apply a mindset: How can we work together? And how can I facilitate the customer? How can I help them?”

This mentality ties in with the wisdom of the past, he adds.

“Good call structure, understanding the person we’re working with, working out what the benefits are for them, asking questions in a certain way” –– it all leads to the ultimate goal, which is to “co-create, to move things forward together,” he says.

“Because that’s how you are going to add value now.”