Crush Your Quotas with an ‘Obsessive’ Approach to Sales Cadence 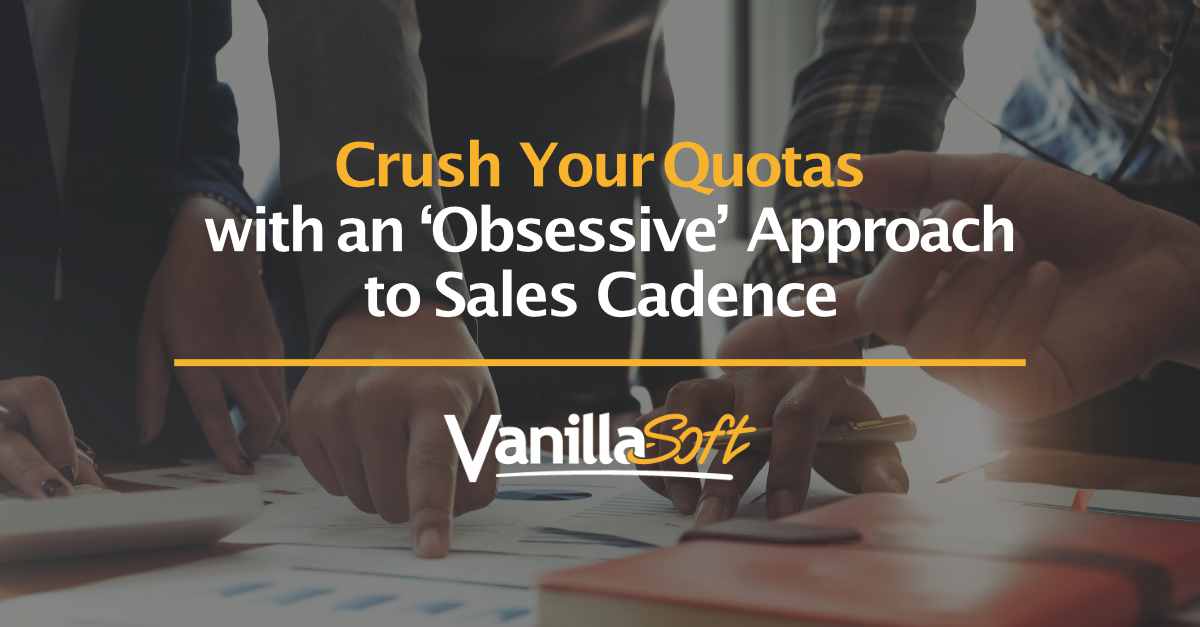 A wise man once said: Obsession is what lazy people call dedication. We don’t know who he was, but we’re guessing he was a sales guy.

To consistently hit quotas, you need your pipeline humming like Kid Cudi on repeat. And to do that, you’ve got to keep a consistent beat. In sales, we call it cadence.

An effective sales cadence is critical

When it comes to cadence, “you’ve gotta be obsessed,” says speaker and sales trainer Luigi Prestinenzi. It’s the hallmark of any high-performing sales pro.

Luigi’s approach to cadence is like that of an elite athlete. You’ve got to work on it every day. Every. Single. Day.

If you do, you’ll never have to worry about what he calls “pipeline-itis.” That’s when your funnel slows to a trickle instead of a flow. And for your hustle to matter, you need that constant flow.

On an episode of INSIDE Inside Sales, Luigi –– the host of the Sales IQ Podcast and co-founder of Sales IQ Global, an e-learning and sales enablement platform –– shares why and how cadence is crucial to a process that delivers what we all want: results.

In December 2012, Luigi was heading into the holiday season with a full pipeline and confidence to match.

“I had insane deals closing,” he says. “And then, one-by-one, they all said, “we’ll do it after Christmas, it’s not the right time, something else has become a priority.”

And before he knew it, his pipeline was drier than the last-minute fruitcake you buy on sale at the local convenience store.

By the first week of his Christmas holiday, Luigi knew he hadn’t made his quota and was scouring job boards looking for another position. (While presumably hanging a single ornament on his Charlie Brown tree).

But he soon realized that if he didn’t change his mindset, he’d be in the same position six months from now.

“So I made the decision to be obsessed with filling my pipeline… to have so much damn activity that it doesn’t matter if somebody doesn’t close today,” he explains.

His self-described “manic” approach can be summed up with B2B selling guru Tony Hughes’ maxim: Opening is the new closing.

For Luigi, taking it to heart means “never having to stress about that one deal.”

It doesn’t matter if you’re a sales rookie or a veteran rep: Any cadence needs to be grounded in the fundamentals of prospecting.

That means knowing your ICP (Ideal Customer Profile). It’s a way to identify the ‘persona’ of your buyer.

“If we don’t know our customers and our prospects and what a day in their lives look like,” Luigi asks, “how the hell can we serve up content that compels them to take action and engage with us?”

If we don’t understand our buyers, “we’re serving our own needs,” he adds.

After all, engagement isn’t about us. It’s about helping our customers achieve better outcomes.

A cadence is built on effective engagement. It means making a habit of circling back, whether it’s once a week or six months later. You’ll learn something new every single time you have a conversation.

Not only does it help you understand your buyers better, but it “gives you stories that open the cadence with new prospects,” Luigi says. “Everybody loves a storyteller.”

Pick up the damn phone

What is Luigi’s most well-rounded advice on cadence? “Have the balls to pick up the phone.”

You can, and should, warm up your prospects on social. Perhaps that’s the first touch in your cadence. But if your rhythm doesn’t eventually include a real conversation, you can’t add that potential client into your pipeline.

Luigi says that many reps default to sending emails, LinkedIn messages, smoke signals – anything other than doing the dreaded ph-word.

“Stop emailing,” says Luigi. “Just pick up the phone. If they don’t answer, send them something. And then do it again. And again…until you get a point of engagement.”

He hears a lot of excuses. Most will sound something like, “I don’t wanna call every day – that’s harassing them. Wah, wah, wah.”

To that, he asks: “How many notifications do you get every single day?”

That’s a rhetorical question, of course. Between WhatsApp, Slack, MS Teams, and old-fashioned text messages, our devices are blowing up.

“That’s the life of a customer, too,” says Luigi. “Your prospects aren’t ignoring you – they’re just saturated with so many different messages that they just don’t see your communications.”

But Luigi says the phone cuts through the noise. And it’s the only thing that does. That’s why he emphasizes the importance of going old-school.

“If we don’t have the courage to pick up the phone, we shouldn’t expect to have a healthy, robust pipeline.”

Track and repeat (until you make the sale)

A scheduled cadence is important because, while so many of us have the best intentions, we allow ourselves to get distracted.

In spite of our best efforts, life happens. Even when we’re not pulled in every direction, it’s tough to follow through. Call it shiny-object syndrome.

How do we ensure we’re not lured away by the glitter of the latest platform and the glamorous prospect of, well, new prospects?

“It starts with you,” says Luigi. Self-awareness is crucial, and so is self-management.

But you don’t have to remember who to call when a good sales engagement platform (like VanillaSoft) can track every touch and remind you when (as well as how) to check in with every prospect. And it won’t judge you if it takes three dozen times. A sale is a sale!

In essence, Luigi’s advice can be distilled to a slogan you might have heard before: Just do it.

But to put our spin on it, we’ll say: Just do it. Relentlessly.

Block and tackle (your sequence)

Running cadences might sound like a lot of work. But it’s a lot easier if you do a bit every day and reserve dedicated time for it.

Luigi recommends planning your day like you’re a CEO. (Guard your time like it’s money – because it is.) That means setting time aside to respond to email and social media notifications instead of doing it piecemeal all day long. Even better, turn your notifications off.

Fun story – Luigi works with a customer who has a sign on the back of his office chair that says: Leave me alone, I’m dialing. That’s the mindset you need when running a cadence.

If you’re like the team at VanillaSoft (or anyone who lives in our digital world), you’re highly attuned to likes, comments, and the elusive specter of inbox zero. But don’t worry about missing crucial calls: You can set up ‘Do Not Disturb’ to prioritize urgent messages from your boo, your mom, your therapist, or your cat.
Let’s be real: Most of what pops up on your phone, your desktop, and your smartwatch isn’t urgent at all.

“By turning that all off, you just get shit done,” Luigi says. “And when you’re done getting shit done, you feel good, because you held yourself accountable.”

And in this case, that shit is contacting prospects over and over until you seal the deal.

All the rest is still there for you to respond to later, at an appropriate time. Like, at the dinner table under the looks of disapproval from others.

“Successful sales professionals get two things right,” says Luigi. “It’s the way they show up – their attitude, their mindset. And it’s the way they manage their pipeline.”

“The only way you can ensure that every month you don’t just hit quota, but you exceed, is by having enough pipeline activity,” he adds.

“And that comes from running enough cadences in the right sequence, and having the right energy to ensure your pipeline is full.” 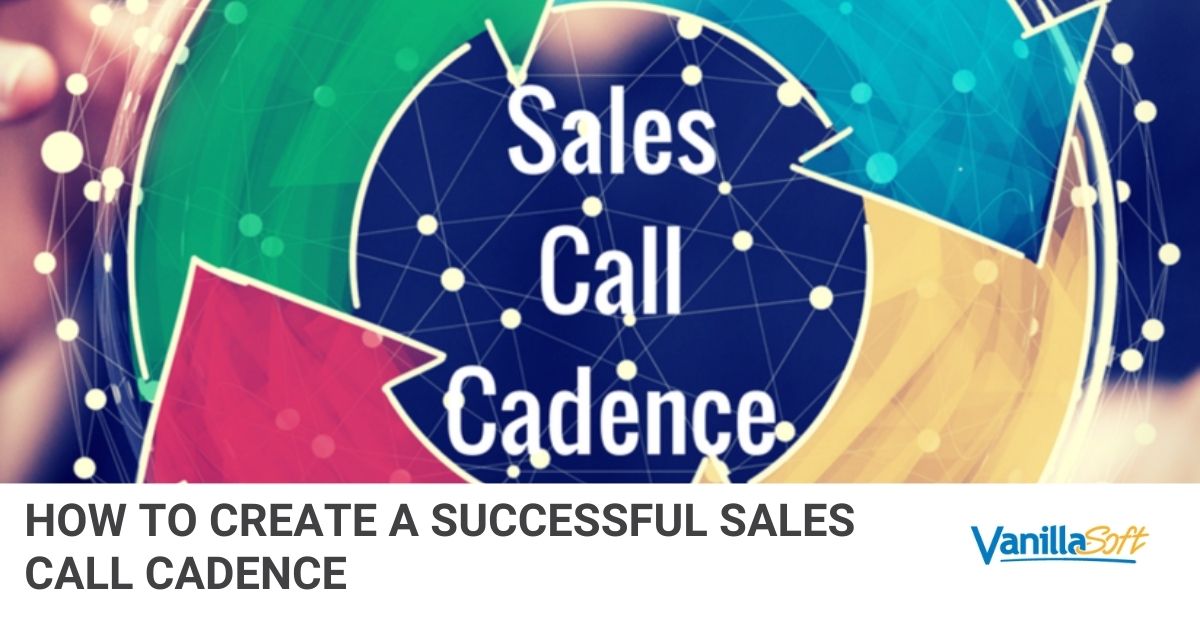 How to Create a Successful Sales Call Cadence